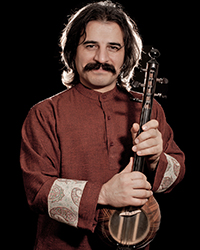 Arslan Hazreti (Aler) was born in Tabriz, Iran in 1976. His childhood period is influenced by Iran's new regime and the Iran-Iraq war. His music life began under the shadow of the new regime and a war-torn country and its harsh conditions he started to learn kamancha at the age of thirteen and took mugham lessons from Cavit Murtezaoglu. The artist, engaging in the Iran and Azerbaijan culture simultaneously, have found the opportunity to internalize the mughams and traditional kinds of music of both regions.

In this period, which was a part of his youth, he never strayed from the traditional music atmosphere and continued to take part in the mugham councils with his kamancha. He had the chance to benefit from the important achievements of traditional culture. The freedom of existence in harmony in the case of Meşk(Meshk culture) was the greatest education in improving its improvisation.

During his childhood, while he began to learn Kamancha also began to think about technical aspects of the production of the instrument. When he was 18 years old, he took part in a professional competition in The International Fajr Festival where he participated with a kamancha of his own production and came first across the famous Iranian professionals. In the final stage of the festival, he performed with masters such as Nusrat Fateh Ali Khan and Aghakhan Abdullayev.
He produced the first five-stringed kamancha in 1996 and with this kamancha, he went to the Baku and took kamancha lesson from Masters like Fahrettin Dadaşov and AdaletVezirov.

In 1997, he returned to Iran and continued his music studies there. In 1999, he was the founding member and vice president of the Music Union of Artists of Azerbaijan. He has been living in Istanbul since 2004. He took part in various projects. Some of these projects are The Way It Is, The Virtuosi and Cavit Murtezaoğlu, Orient Expressions, String and Skin. He also worked with well-known artists such as Susan Deyhim, Aynur Doğan, Richard Horowitz, Ross Daly, Yurdal Tokcan, Vamik Memmedaliyev, Yinon Muallem, Şirin Pancaroğlu, and Feryal Öney, Imamyar Hasanov, Derya Türkan. He took part in albums, concert sequences and album of the project with Cavit Mürtezaoğlu and Feryal Öney and Torosa project from Tabriz.

He signed the projects called ‘’Meşk-i Kamança’’ and ‘’Meşk-i Yay’’. These two projects performed various concerts in Turkey. Meşk-i Yay project is a duet of two different stringed instruments. Within the scope of this project, he gave duets with Ross Daly, Derya Turkan, Imamyar Hasanov, and Uğur Önür. He has a trio with Imamyar Hasanov and Volkan Kaplan in the digital album ır Carpet ‘. Meşk-i Kamancheh project, Ozan Bircan, Göktuğ Steel, Huseyin Yalcin, Ugur front, Mehtap Demir from Turkey were as many Kemane and performs concert series with Kamancheh artists.

He has established a workshop and made various stylistic studies on production of kamancha there. He has enriched the instrument by developing different methods for intonation and using the instrument. As well as five-stringed kamancha he has brought some types of kamancha such as bass kamancha, baritone kamancha, kabak kamancha(Anatolian Kamancha) and The Frame Kamancha to the family of kamancha.

He organized workshops in various countries and participated in the festival with the method developed by Kamança. He is a Kamança instructor at The Labyrinth Musical Workshop which is held every year on the Greek Island of Crete under the supervision of Ross Daly.

He has developed distinctive techniques about the education of kamancha. These techniques based on knowing the anatomy of the body well and integrating the body and instrument (saz). Therefore this can be summarized as high performance with low energy. He gives kamancha lessons at all stages from basic level to master level with these special techniques. Also, he gives lessons on Azerbaijani and Iranic modals (mugham).