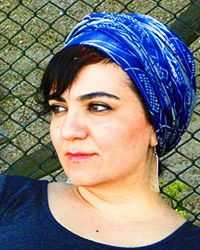 Veka Aler is a singer, and a vocal teacher. She was born in 1980 in İstanbul. Her family is originally from Erzincan where is one of the considered areas of Anatolian culture. She started to learn traditional culture and music in the family naturally. Throughout her life, she interested in different cultures and their kinds of music whereas the languages. Especially Eastern cultures mean a world for her. There is a very common soul and she couldn’t separate these cultures from each other and feels belong to all of them at the same time completely.

During her musical journey and exploration took part in different musical work and has met the master musician and voice expert Cavit Murtezaoglu and started vocal lessons with him. She took voice and music education in his school and took part in his different projects. By this education, she got knowledge about singing in Makam music as well. During Murtezaoglu’s voice method creating and preparing process, she took part in this work as his assistant. In paralel of this study started to teach with that special voice method. Still, she is continuing to vocal classes. She is married with The Iranian kamancha artist Arslan Hazreti. Thanks to their sharing of understanding of musical and multicultural perspective she got the chance to know very closely Eastern Music and a lot of master musicians from all around the World.

The reason she sings in different languages is to express not only the diversity but also the language and culture she has embraced in herself and her life in her music and at the same time desire to express the cultures she sees as a single world on a common platform. This is also due to the fact that these cultures, which have a common foundation, regard it as a single world.